US stocks tread water, waiting for the next big news to push them higher – Market Overview 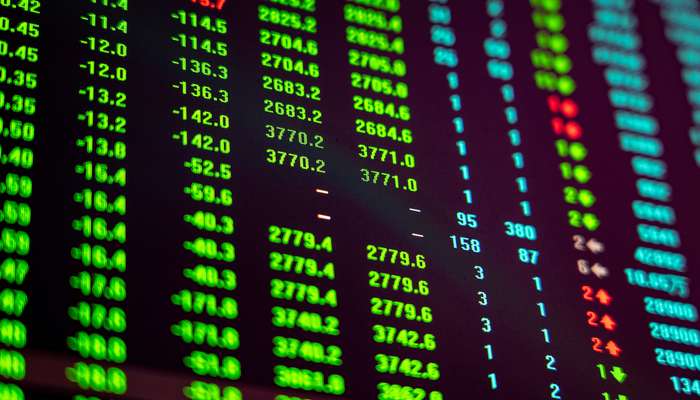 The yields of the US Treasury bonds continue their upward path without pause.

The possibility that the expansive monetary policy of the Federal Reserve does not have as long a time course as was initially expected is beginning to win supporters among market analysts and investment banks.

The leading cause is the expectation of a substantial fiscal stimulus package promoted by a unified Democratic government that could rise to several trillion Dollars, but also the possibility of an inflationary rebound that, although not yet showing signs of life, could appear with the enormous amount of funds that the government plans to deploy to stimulate consumption.

The 10 American T-note bond had reached a yield of 1.16%, level not seen since the end of February before the Federal Reserve decided to lower interest rates. 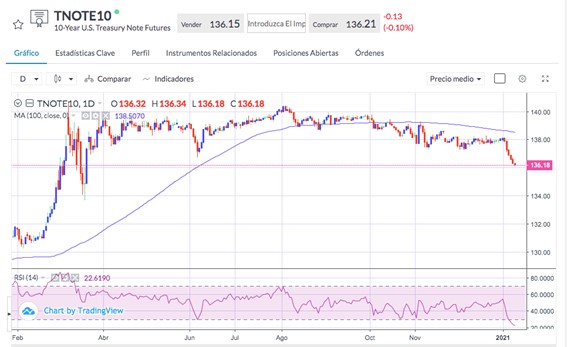 In price, the bond has broken the main levels that have acted as support and finds no obstacle until the 134.80 zone, which would lead to a yield of around 1.40%. This enormous steepening of the curve is nothing more than a forward on the part of the market of a rapid economic recovery and to a certain extent of protection against outbreaks of inflation.

If this scenario is confirmed, the stock markets will benefit, and this optimistic situation would only need a better evolution of the level of contagion of the epidemic that, for now, has not occurred. The positive effect of the administration of vaccines, something we will know in several months.

On the day, the stock indices experience only slight gains within a somewhat lateral market waiting for catalytic news to restart the upward trend from recent months.

After strengthening in recent days, the US Dollar, mainly caused by the rise in long-term interest rates, corrected very slightly downwards in a movement of an exclusively technical nature with no relevant economic news today.

Only in the case of its price against the pound sterling, the dollar has weakened more strongly.

GBP/USD has gained almost a full figure today, 80 pips at the moment, following comments from the Governor of the Bank of England, Baileys, ruling out the possibility of negative interest rates, something that had become a subject of debate in recent years (months, as it is considered ineffective given the lack of transmission of this measure to the banking system's real economy).

Also, Governor Baileys has made a less harmful assessment of the effects of this second lockdown on the British economy.

The pair regains territory lost in recent days and finds its first resistance at the 1.3635 area, followed by a second level at 1.3670.

In a broader time scenario, the pair continues to trend upward since the end of September, a movement that accelerated after the Brexit agreement and has a central support level in the 1.3440 area, a level that it should not drill to maintain the current trend. 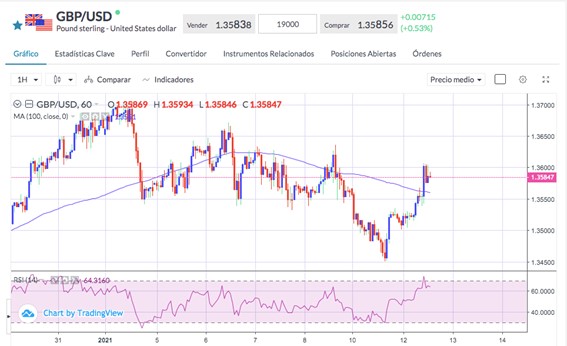