Public holiday in the U.K. and the U.S, but action still aplenty – Market Overview

Today is a public holiday in the United Kingdom and the United States, so the activity in the market could be substantially weaker.

However, we should not rule out a movement of greater magnitude due to the lower number of participants in the market and thus less liquidity.

Why? It’s simple: the market still weighs in the PCE price index report published on Friday - the inflation figure that the United States Federal Reserve follows the most to evaluate its monetary policy decisions. The figure shot up to 3.6%, well above the inflation target of around 2%.

The great unknown is whether this is a transitory and reversible phenomenon due to the rapid recovery of the economy, or whether it is the beginning of an inflationary process where the reduction of the asset purchase program would be required. The answer will be known as the inflation data for the coming months and also the labor market figures become known.

In this regard, the NFP report scheduled for this Friday would most likely be super important.

The immediate market reaction after Friday's PCE report was mixed. The U.S Dollar strengthened, a logical movement in an inflationary context that anticipates increases in interest rates, but the flow reversed during the session, leaving the price of the North American currency practically unchanged.

It also did not have a major impact on the price of Treasury bonds. In fact, the yield of the 10-year bond has fallen slightly from the 1.60% zone to the current 1.58%. This shows that market uncertainty remains high, and could require more data to confirm or deny these signs of inflationary pressure.

The future evolution of the U.S Dollar continues to be a matter of controversy in the market with divergent forecasts from analysts and investment banks.

One factor to take into account for the future evolution of the Dollar is its price against the Chinese yuan. Until now, the Chinese authorities have allowed the Dollar to plunge since the beginning of May to reach levels not seen in three years. But voices are beginning to emerge within the Chinese authorities - specifically a former member of the PBOC – speaking about reversing this movement due to the damage it can cause to the country's exports. This would have a direct effect on the global price of the Dollar.

Technically USD/CNY is at oversold levels with a bullish divergence on the weekly chart. 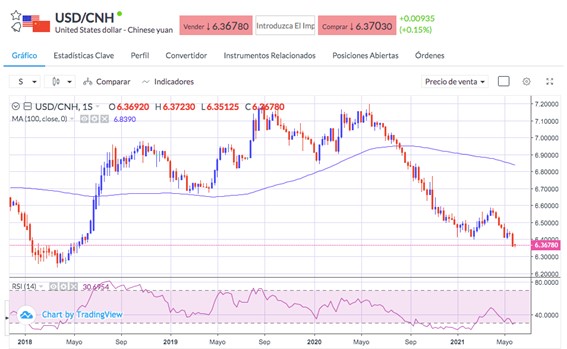 Comments and warnings to market participants against the excessive strengthening of commodities have also intensified in China, which they consider to be due to an excess of speculative positions. Any action taken by China to counteract this trend would have an immediate effect on the price of commodities. 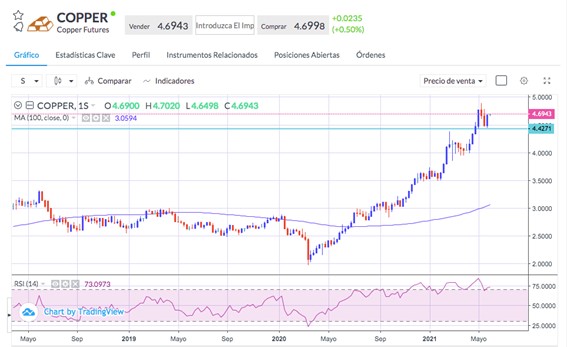 In this sense, it can be taken as a reference to COPPER, the main industrial metal of which China is the main consumer with 50% of world production.

The metal has been in a consolidation phase for the past three weeks, after a bullish rally that began in March last year.