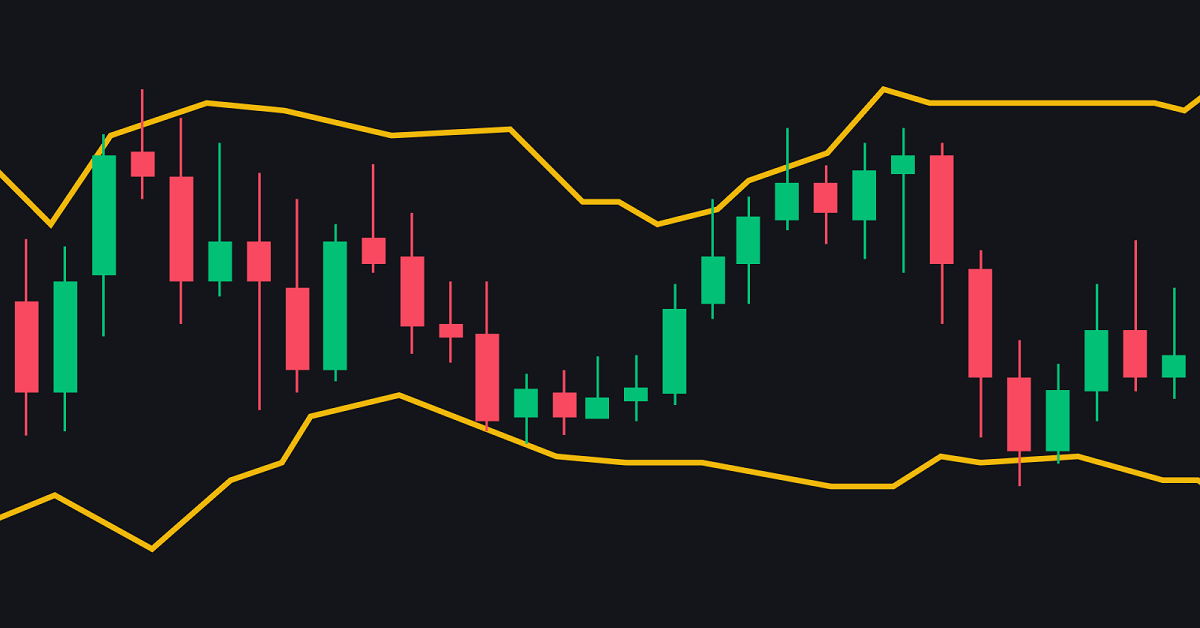 Bollinger Bands are used to analyse volatility and trend strength, which is particularly useful when opening and closing trades quickly in a volatile market.

Bollinger Bands is an advanced form of trading band developed by John Bollinger and used by traders worldwide. But, like any other indicator, they only provide a framework, NOT absolute BUY and SELL signals. All trading bands exist for a single purpose, to answer the question "Are prices relatively high or low?". That bit of information is incredibly valuable and even more powerful if combined with indicators that depict where the price is in relation to the bands and how wide the bands were, along with supply/demand tools.

Of the hundreds of technical indicators out there, the Double Bollinger Bands is Kathy Lien’s favorite: “It provides a wealth of actionable information. They tell us whether a currency pair is in a trend or range, the direction of the trend, and when the trend has exhausted. More importantly, using the standard Bollinger Bands settings with a brilliant modification traders can also identify entry points and proper places to put a stop-loss”.

How to use this guide

To get the most out of this guide, it’s recommended to practice putting these Bollinger Bands indicator trading strategies into action. The best risk-free way to test these strategies is with a demo account, which gives you access to our trading platform and $50,000 in virtual funds for you to practice with. Get your free demo account.

Once you’ve found a strategy that consistently delivers positive results, it’s time to upgrade to a fully-funded live account where you can apply your newfound edge.

What are Bollinger Bands

The Bollinger Bands are trading bands that focus on volatility. By allowing the movement of prices themselves to set the width of the bands, John Bollinger's Bollinger Bands can react quickly to market conditions.

Bollinger Bands are a simple yet powerful combination of channels and Moving Averages (MAs). Bollinger Bands consist of a Simple Moving Average (SMA) surrounded by an upper and lower band plotted by a certain number of standard deviations above and below the Simple Moving Average. Think of them as flexible channels whose width varies with price volatility. The wider the price swings over the period of the SMA, the wider the channel; the narrower the price range over this period, the narrower the channel. 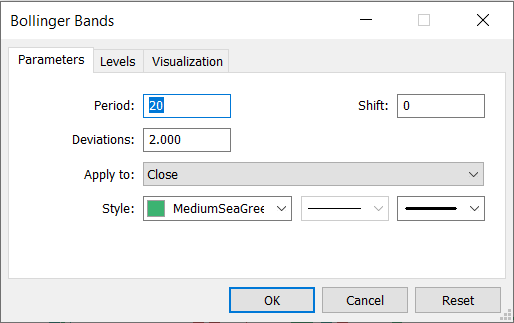 You can change these settings to suit your needs, and later we’ll look at one useful variation, the Double Bollinger Bands. However, the standard settings are popular and are worth watching for the sake of knowing what the herd is seeing as potential support/resistance from the lower and upper bands.

You can perform the Bollinger Bands calculation using the following formula.

The Bollinger Bands indicator is available on our online trading platform, WebTrader. Our award-winning platform allows traders to customize technical indicators and tools, add drawing tools to price charts and graphs, and identify chart patterns in order to improve their trading strategy.

How to use Bollinger Bands

The two standard deviation width of the channel means that the statistical probability of price hitting the bands given the price range of the past 20 periods is only about 5 percent. However, like any statistical measure, it assumes that all elements of the sample, in this case, the 20 periods, are the same.

That assumption works for flat, range-bound markets or gently trending markets, which are times when no change occurs in the market's perception of a currency pair’s value. Under those conditions, the upper and lower bands provide reliable support/resistance points. In flat or mild trends, the price tends to fluctuate between the upper and lower bands, as the price bounces off the upper and lower bands like a ball bouncing off the floor and ceiling. Even if price swings widen or narrow, Bollinger bands adjust for those conditions and widen or narrow with the price swings, providing support/resistance points that adjust with volatility (a uniquely valuable feature of Bollinger Bands).

Using the standard default Bollinger Bands settings of a 20-period SMA middle band with each band two standard deviations distance from the middle band, there is only a 5 percent chance that the price will ever touch the outer bands. Again, this calculation assumes (as with any statistical measure) that all sample elements (the past 20 periods) were the same and all prices equally probable. When there’s no strong trend or no trend at all, that assumption applies. Flat price action suggests that market perceptions about the value of security haven’t materially changed.

However, that assumption doesn’t apply in a strong trend, which indicates market perceptions about value are changing.

How to trade with Bollinger Bands

When you see the Bollinger Bands and you want to place a trade, you can do so via derivatives such as CFDs. Derivatives enable you to trade rising as well as declining prices. So, depending on what you think will happen with the asset’s price when one of the Bollinger Bands frameworks appears, you can open a long position or a short position.

Follow these steps to trade when you see the Bollinger Bands framework:

The below strategies for trading Bollinger Bands are merely guidance and cannot be relied on for profit.

By using Double Bollinger Bands (DBBs), we get a much better indication of:

You don't need to download Double Bollinger Bands. To create them on your candlestick chart, just insert the second set of Bollinger bands at one standard deviation on your moving average. Consult your trading platform’s help menu. For now just know that they are units of distance from the 20-period simple moving average (SMA), which is both the center of the Double Bollinger Bands and the baseline for determining the location of the other Bollinger bands.

Here is an example applied to the USA30 chart.

Notice how these bands form four separate zones. It’s these zones that provide the added information about the strength of a trend, whether it still has the momentum to continue, and where we might attempt to enter trades, even if there is no other support/resistance to serve as a reference point.

In other words, Double Bollinger Bands tells us whether we should be trading a trend or a trading range.

As with most technical indicators, the longer the time frame of the chart on which they’re viewed, the stronger the momentum indicator that Double Bollinger Bands provide.

The four rules for using Double Bollinger Bands in trading

Here’s a short summary of how to use Double Bollinger Bands.

Thus, the key qualification to Rule 4: There should be no major contradictions from other technical indicators or fundamental data that suggest the trend is in fact exhausted. If there are, stand aside, and don’t trade until the situation clarifies.

A consolidation phase suggests that the market is non-directional for the time being and now rangebound in nature. The narrow or narrowing Bollinger Bands will essentially move closer to the price and at some stage appear to be ‘Squeezing’ the price. It is at this stage that breakout traders might pay attention.

It is also preferable to see the upper and lower band starting to widen in a breakout scenario. The widening of the bands suggests an increase in volatility to confirm the move out of consolidation and into a new trend.

The narrow bands suggest a period of low volatility often associated with a sideways market environment (consolidation). Widening bands suggest an increase in volatility often associated with a trending market environment. Volatility is considered cyclical in nature in that a period of low volatility is a precursor to high volatility and vice versa. Combining price breakouts with Bollinger Bands is often referred to as a volatility breakout strategy. The strategy whereby we wait for a narrowing of Bollinger Bands as a precursor to a breakout is known as a Bollinger ‘Squeeze’.

At the end of the day, Bollinger Bands are tools. They can be used in the creation of your own trading strategies and approaches. John Bollinger’s indicators are used by traders around the world and across many different markets in a wide array of approaches. Because they are tools, not a system, and because Bollinger Bands applications are so diverse, they continue to work year after year as they are adapted and applied in new ways.

The Bollinger Bands indicator is a lagging indicator that does not produce trading signals. It can help you stay on the right side of the trend and spot potential reversals, though. For that, you'll need to:

Some of these complementary technical analysis tools can be found on the CAPEX.com platform, including RSI, MACD, Stochastic, ADX, Ichimoku, and many others.

Remember, you should have some trading experience and knowledge before you decide to trade with indicators. You should consider using the educational resources we offer like  CAPEX Academy or a demo trading account. CAPEX Academy has lots of courses for you to choose from, and they all tackle a different financial concept or process – like the basics of analyses – to help you to become a better trader.

Our demo account is a great place for you to learn more about leveraged trading, and you’ll be able to get an intimate understanding of how CFDs work – as well as what it’s like to trade with leverage – before risking real capital. For this reason, a demo account with us is a great tool for investors who are looking to make a transition to leveraged trading.

You can use the ATR to establish where to place a stop or limit order, as well as when you might want to open or close a trade.

The parabolic SAR is a technical indicator that can help spot the current trend direction, help with entering and exiting trades, and highlight potential reversals.

The Zig Zag indicator lowers the impact of random price fluctuations and is used to help identify price trends and changes in price trends.